John Duncan Talbird is an English professor at Queensborough Community College and is on the editorial board of Green Hills Literary Lantern and a frequent contributor to Quarterly Review of Film and Video. His fiction has appeared in Ploughshares, South Carolina Review, New Walk, Grain, REAL, and more. 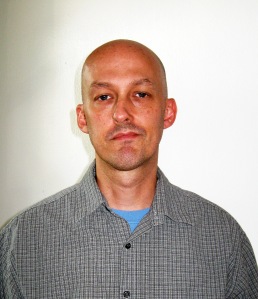 Amoskeag: In All as Stationary as the Stars in the Sky, your main character, Freddie, has a set routine. He waits in the park for people to hand him spare change, collects his earnings, and walks over to the McDonald’s. How did he get to that point in his life? Why does he see the world the way he does?

John: Good question. I run in a different park here in Brooklyn, Prospect Park, and for a couple months, I kept passing the same guy. He wasn’t panhandling, but he was sitting on a bench and huffing something out of a paper bag. I’ve always thought of huffers–people who sniff paint, glue, etc.–as teenagers, but this guy was older, maybe forties, though the street is hard on people and many homeless seem to come unstuck from their true biological age. I thought about this guy sitting there day after day and I naturally wondered why he was there, what brought him to that moment. The story arose out of my curiosity and, I admit, a little sadness when he disappeared.

Amoskeag: The story begins with a woman in a “Park Avenue fur coat” who drops a bill into his cup. As she walks away, a falcon picks up her dog and begins to fly away. The woman is screaming, but Freddie just stands there, watching and doing nothing. Why did you begin “there”? What is the significance of this scene?

John: The scene is like a catalyst for the whole story. I’ve seen these gigantic birds–falcons–in both Prospect and Central Parks and I’ve seen them while out hiking in Upstate NY, New Jersey and elsewhere. Somehow, seeing them in an urban environment is more awe-inspiring. They seem so out-of-place here that it’s hard not to stare even when they’re just perched on a branch doing nothing. It was important for me that the bird do something fantastical and that Freddie not be shocked by it. People can become desensitized to the fantastic, to the sublime–by drugs, but also by addiction to anything: mass media, work, their smart phones. But none of us are born that way. I wanted to follow the thread of that desensitization backward. It’s risky to say that anyone ends up anywhere or as any type of person because of this or that factor. I just wanted to follow his life backward and see where he came from.

Amoskeag: Did you see the ending coming, or did it suddenly surprise you? How did you prepare for it?

John: I did know that I would come back to that moment in the park; I knew it would be a framing device. But I was surprised that his mother died, that he was there to see her die. That was a bit of a shock to me, but once that moment arrived, it felt right.

Amoskeag: Is your character’s view of the world reflective of the way you see the world? Or were you surprised by what he saw? How he felt?

John: I think it’s entirely natural to want to escape pain. That’s why painkillers exist, why they’ve always existed in one form or another. We all have to figure out how to cope with whatever it is that troubles us, whatever hurts us. In addition, I think it’s also natural, for young people, at least, to experiment. The problem arises, I think, when that experimentation becomes a way of life.

Amoskeag: As Freddie reflects upon the loss of his mother, the reader starts to understand how it has affected him and shaped the man he has become. How did you construct the language of the piece? How did you come to hear and record the feelings of your narrator?

John: I’m not sure if Freddie DOES reflect. Or if he does, I can’t say that I’m aware of it. Readers may draw their own conclusions based on what the 3rd person narrator tells them, but I meant the narrative voice to be a “cool” one, one which reports, but doesn’t have a lot invested in the protagonist. I leave it up to the reader to decide how effective or not I was at that.

Amoskeag: “Sometimes, when one spends months and months in a hospital with a broken pelvis and a snapped spine, when one needs a clear drip of warm liquid in one’s veins to make it sanely to this moment to that, one emerges allergic to pain.” Why does this line matter in this piece?

John: I was thinking about that great Morphine song, “Cure for Pain”: “Someday there’ll be a cure for pain / That’s the day I’ll throw my drugs away.” All types of people get hurt in myriad ways and there are myriad ways of coping with that pain. But like the song says, there’s no cure. You can cover it up, move it off to the side, think of something else, but it’s still there.

Amoskeag: How do you feel when a piece gets accepted and readers that you don’t know are now going to read the story that you worked so hard to shape?

John: I feel great. It’s the entire reason I write: to be read, to connect with readers who might like the same kind of fiction I do.

Amoskeag: What’s next for you as a writer?

John: I’m always working on something. This story is part of a collection I’m working to finish, Fancies, Games, and Random Documents, all sudden/flash fictions (stories under 2000 words). I’m also working to finish a novel about lighthouses, insane asylums, and the CIA. And I’ve just begun writing a series of essays about aesthetics.