Eleanor Leonne Bennett is a 17 year old international award winning photographer and artist who has won first places with National Geographic, The World Photography Organization, Nature’s Best Photography, Papworth Trust, Mencap, The Woodland Trust and Postal Heritage. Her photography has been published in the Telegraph, The Guardian, BBC News Website, and on the cover of books and magazines in the United States and Canada. You can visit her website at http://www.eleanorleonnebennett.com/ 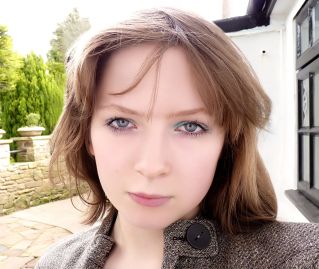 Amoskeag: Your photograph is titled “Dilated Eyes.” Why? What does it mean to you? What do you want your viewers to take from it?

Eleanor: At the moment of the image being taken I wanted to capture a sense of shock but also feeling of being erratic and hyper. The flash causing the pupil to look so large is the essence of the image to me. The viewer should feel what distinguishes it from an average portrait are the subtle things. What is the girl looking at? Why is her hair cut to wonky lengths? Why the purposely over exposure so much that you can only tell parts of the face through mere outlines?

Amoskeag: In “Dilated Eyes,” although only one side of the woman’s face is visible, the viewer can sense the emotion and create a story behind the photograph. How do you come to capture that in your photographs?

Eleanor: It was a self-portrait at a time where I was trying to practice with light and backgrounds. Not being able to afford a formal background I used the door of my wardrobe. Of this you can find a line in the image. This is the between space of the wardrobe doors. I was feeling out of sorts and impatient when that frame was captured.

Amoskeag: What are you looking for when you take a photograph? How do you translate an image in your head into what it will become; the final product?

Eleanor: It comes as second nature to translate. The edit, the frame will not stand in the way of my vision. It is instinct to change the photo to become what my minds eye interprets. I’ll sacrifice print quality and even risk interpolation to get to my aim in an image I really want to become me.

Amoskeag: As a photographer, designer, writer, and content creator, do you struggle to keep these worlds apart?

Eleanor: The worlds meld but the first three genres don’t fulfil me enough to commit to only them. There are a lot of ideas and themes I have fluently in my mind that I draw upon but I know I want to curate when I’m older. I want to do large scale projects you can touch and find dimension in easily. I also want to work with audio and filming for the complete creative experience.

Amoskeag: What impact do you hope to leave through your work?

Eleanor: A lot of the thoughts or remnants of memories left are open to critical interpretation. I like to be challenged and to question what makes myself myself. I want to put this forward to more of my audience but whilst I can’t find the frames to do so my already published abstract work displays this. What does the blood tell you, how about those sullen faces? Do the cracks in our built and polished world just allow for the possibility of another form of better?

Amoskeag: Whose work has influenced you the most, and what do you think sets them apart from other photographers?

Eleanor: I am very interested in the work of Bill Brant, Cindy Sherman and Alexander Rodchenko but I supplement that with work of painters that unsettle me. Zdzislaw Beksinski is so fascinating and was also born on the 24th of February like myself so I’m obsessive over that work at the moment.

Amoskeag: At a young age, you have already achieved so much. What advice can you give to young aspiring photographers?

Eleanor: Care enough to cherish the opinion of those who have the best intentions for you but don’t care so much as to let every meandering utterance ruin your entire aesthetic.

Amoskeag: What’s next for you as a photographer/artist? Hopefully more awards, I am being continuously exhibited with little effort.

I will be being published at my own rate. In comparison to the amount of work being published when I was 14 in bulk so to speak I’ll probably space the same amount of releases in six year period. I’m making time for myself and my privacy in art and keeping the cards held close to my chest.

Charlie Lemay is a photographer, graphic designer, and digital artist. He is also a full-time Associate Faculty at St. Paul’s School in Concord, New Hampshire, where he teaches Photography, Computer Graphics, and Fine Arts Foundations. His fine art digital and black and white images can be viewed at www.charlielemay.net. 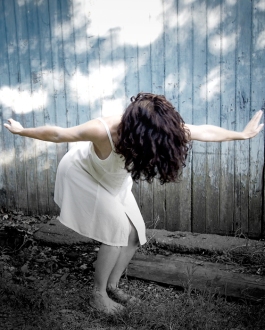 Amoskeag: Your photo is titled “Fear of Flight.” Why? What does it mean to you? What do you want your viewers to take from it?

Charlie: This image was made during a week-long workshop with photographer, Keith Cater, at the Maine Media Workshops in 2010. The woman in the photograph was a fellow photographer who happened to have been a trained ballerina. The class was taken to a place called Elmer’s barn that was full of old rusty metal and antique stuff which provided many opportunities for image making. At one point, the ballerina began to dance and called to the other photographers to make photographs of her dancing. The original image was in color and captured digitally, so the black and white reproduction in Amoskeag is not how it is meant to appear. Shadows in color photographs always appear bluish unless filtered to be neutral the way the eye sees. I knew that the shadow of the trees behind the dancer would give the appearance of a blue sky with fluffy clouds. It was clear from the siding, that this was a backdrop and not an actual sky, and with her head down and crouching as though wanting to take off, I saw it as a doomed attempt to take flight. Fear seemed a plausible reason for not being able to fly. I faded to color toward the bottom, which becomes strictly black and white, to emphasize her being grounded..

Amoskeag: In “Fear of Flight,” the woman’s arms are spread out with her feet planted firmly on the ground. Even though her face is covered by her hair, the creation of story and emotion is still vivid. How do you come to capture that in your photos?

Charlie: Not being able to see the woman’s face, means the head down implies a kind of sadness. The outstretched arms imply an attempt to fly. Her flat feet on the ground imply it is not going to happen. A moment later, of course , she stood straight up and danced away. The moment captured allows us to create an alternative narrative, which is really based on our own assumptions. I made a second photo that day a few minutes before this one. I call it Buzcut. This happened when the model danced away. I was just getting into position on the ground to emphasize the large saw blades in the background and because of the shutter lag time of the digital camera I was using, she was nearly out of the frame when this image was made. All we see are her legs and the edge of her dress in motion juxtaposed with the ominous saw blades. I also faded the color at the bottom on this one and the result again is a sort of grounding that allows the colored top to come to life out of the lifeless black and white bottom. Although there were several other photographers photographing this same scene, none of their images looked at all like these.

Amoskeag: As a commercial photographer and graphic designer, and as an innovator in digital photography, do you struggle to keep these worlds apart?

Charlie: I think commercial work was my alternative to graduate school. When I graduated from Bowdoin College in 1972, I really could not afford to continue my education, so I found a way, to get other people to pay me to keep learning. Everything I have learned in the commercial arena has given me skills and experience I was able to bring to art making. La t summer. I officially retired from commercial design and photography for others and will totally focus on my own projects going forward.

Amoskeag: Your body of artistic work consists of myth and allegory, nature and detail, how do these different ways of seeing fit together?

Charlie: I’m the connection. The Digital Theatre series, which eventually culminated in my Digital Tarot, is totally inspired work. That is, I see each image in my mind before I begin. It may take me years between having the vision for a piece and its completion, so it may change, but the core idea is there from the beginning. I don’t always know what the piece is about me, I only know that I must make it. As I make the piece and live with it over the years, it will reveal itself in some way that teaches me about myself and the world. I have no doubt that I have changed in response to this work in ways that allow me to see the world differently and to make images I would never have made without that incoming experience. When I work in traditional black and white photography, I am using those new eyes to see the everyday world in a new way. So this is me outgoing, recording what I notice with those new eyes. I like to think that the traditional black and white images are my passion and the digital collages my mission. The former my haiku and the later my epic poetry.

Amoskeag: What do you hope to achieve through your work?

Charlie: The job of the artist is to wake themselves up, then to wake up others. That’s what I want to achieve.

Amoskeag: As a teacher, what is the best advice you can give to your students or other aspiring photographers?

Charlie: Learn to see light rather than things.

Find the extraordinary within the ordinary.

Another one of Charlie’s photographs, titled “Ouroboros”.

Amoskeag: Whose work has most influenced you, and what do you think sets them apart from others?

Amoskeag: What’s next for you as an artist/photographer?

Charlie: I just completed my first book, “Seeing, Insights + Images,” which will be out in a couple of months. It is a series of 40 black and white images alon side something I have said about my experience in the world. Having the two side by side makes for some interesting contrasts and connections. The first edition of my Digital Tarot will come out and be available by summer. I expect these two projects will take up most of my time over the next few months. Meanwhile, I continue to make black and white images every week. I am also working on a black and white installation piece, which I hope to complete over the next two years, but it is too early to talk about the details of that one. People who follow my website, will be the first to know when that project is nearing completion.